The valuation of US stocks has reached new highs after Donald Trump's inauguration as president of the US. However, it is still the companies and the price tags that count when it comes to returns.

The valuation – or price if you prefer – is perhaps the most important factor we take into account when investing in the stock market.

The US stock market is now enjoying its eighth consecutive boom year. That is why the fundamental analysis of underlying values is so important in order to ensure that substance and not air is priced into the stock prices. Some investors – index managers – try to avoid the task of assessing the value of individual companies by buying the entire investment universe which consists of both expensive and cheap companies. Others blindly focus on mathematical factor models.

The graph below shows the rolling ten-year returns for the US S&P 500 index. This time series is combined with Professor Robert Shiller's 10-year cyclically adjusted price/earnings. 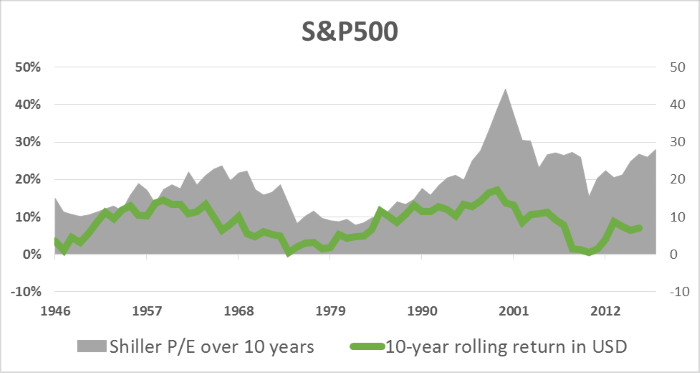 The graph demonstrates that there is a correlation between valuation and return. Let us say, for example, that an investment was made in 1989, two years after the major crash of October 1987 when the market had returned to the same level as before the crash. If you look at the returns ten years later, you see that in 1999 the average annual return in the period was 16 percent.

Likewise, if you had made an investment at the peak of the graph in 1999, when valuation was at its highest level, ten years later you would have received an average annual return of just one percent.

The example used here is at an overall and combined level. However, the situation is the same if we look at individual companies over long periods of time. History has demonstrated that the best returns are created by finding stocks that are low priced relative to the fundamental values in the companies.

My view has therefore been that passive investors have quite simply given up. They choose to take a free ride when it comes to determining the pricing of assets.

Determining the price, and ultimately the valuation of a company, is a result of the fact that different investors have different views of a company. If no one has a view of what something is or will be worth, how can a market price then be determined?

On 25 January this year, the Dow Jones Industrial Index hit a milestone and exceeded 20 000 for the first time in history and remains at that level today. The S&P 500 also reached record levels. It is therefore natural to ask oneself where we will go from here. The latter index hit peaks in 2000 and 2007. On both occasions it took almost seven years before the index made its way back up to peak levels.

If we look at the valuation of the S&P 500, it is now at a relatively high level historically speaking. The average price, measured as price/earnings per share, has been around 16.7 since the 1870s. At the time of writing, the US index is at 21.1, which is 26 percent higher than the historic average. The US stock market therefore appears to collectively be at a level that indicates moderate returns over the next decade. In particular if we consider that operating margins are more or less averaging 12 percent over the past 20 years.

Having been an investor for many years, I know that stock prices will fluctuate more than the underlying values. However, I have faith that when we find a company whose price tag is too low, the returns will be good.

Picking the right company's in today's market is therefore more important than it has been in a long time.