A prominent and interesting development in equity investing over the past several years has been the growth in shareholder activism.

In this article we explore:

Once the preserve of specialist hedge funds and usually confined to takeover situations, activists are increasingly prevalent as minority investors put pressure on companies to change their corporate governance, strategy, business or capital structure with the aim of realising shareholder value. 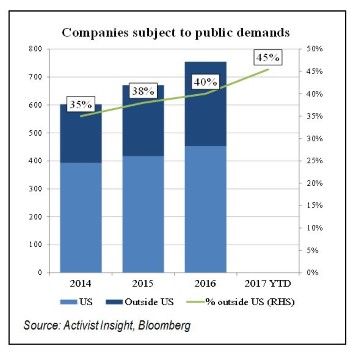 Many investors seeking corporate change prefer private, constructive dialogue with company management to the more aggressive, public form of activism which is more widely reported in the media. Whether acting publicly or privately, activists seek to unlock value in operations, financial management, corporate strategy or corporate governance. While public activism is predominantly a US phenomenon, activism in European and Asian companies is increasing (see chart). This geographical expansion has accelerated as activists have pushed for change at founder and family-controlled businesses which are more common in these geographies. Social media has also played a part with Facebook, LinkedIn and Twitter frequently used as a forum for debate and to gather support from private investors and other company stakeholders.

Activism has become increasingly effective in driving positive change. Often negatively perceived (and often painted by company management) as self-interested, short-sighted and value destructive, executed properly the strategy benefits all shareholders by upholding minority investors' rights as well as environmental, social and governance values. Employees, customers, suppliers and society in general should all gain from better-run companies that engage constructively with their multiple stakeholders. According to research firm Activist Insight, 58% of activist demands were at least partially met in 2016, up from 53% the two previous years, while companies subject to successful campaigns systematically outperform and benefit from a median share price increase of 5% per annum when shareholder demands are met.

While SKAGEN is not primarily an activist, our value-driven investment approach often leads us to underperforming businesses with identifiable catalysts for improvement, which are also targeted by activists. Indeed, some of our funds' best performing stocks have been helped by activists appearing on the shareholder register and going public to bring about the changes we've also identified to release value.

Four of SKAGEN Global's top five contributors in 2017 have been subjected to activist campaigns, with a couple of notable successes. Samsung Electronics – a 4.6% holding and the fund's top performer last year and this – made concessions to activist Elliott Management in April by cancelling $35 billion of treasury shares and paying its first ever quarterly dividend. Stronger corporate governance has been a key part of our long-term investment case for the Korean electronics company and this year it has contributed +2.2% and +3.9%* to Global and Kon-Tiki, respectively.

Meanwhile Microsoft – currently a 5.2% position which was Global's second best 2016 performer and number three this year, contributing +1.3%* – has had board representation for several years from ValueAct, which invested $2 billion in 2013 and whose pressure led to the ousting of Steve Ballmer as CEO. The activist fund has helped drive the US tech giant's successful push into commercial cloud and enterprise computing that underpinned our investment thesis.

For SKAGEN Focus, one of the strongest year-to-date performers is Polish vodka producer Stock Spirits, where the largest shareholder Western Gate successfully gained board representation and has applied pressure on management to reduce costs. Similar success stories have been Adient, where activist Blue Harbour followed us onto the shareholder register and helped propel the auto seating supplier towards our target price by calling for growth in margins, dividends and buybacks, and Omega Protein, with activist investor Wynnefield Capital gaining seats on the board and pushing for the nutrition company to restructure ahead of its recent takeover. These three holdings have contributed combined returns of +2.5%* in 2017.

In each of these cases our funds' unitholders have benefitted from share price appreciation while avoiding the significant costs incurred by the activists in engaging with company management and planning and publicising a campaign. These costs are reflected in the high fees typically charged by activist funds, which can include a 20% performance fee on top of a 2% management fee.

As activists grow in number and sophistication and enjoy greater levels of success, they are likely to play an increasingly important role across the corporate landscape, which companies will find harder to ignore. In addition to growing levels of capital available for activist investment, several structural forces suggest increasing opportunities ahead for its successful deployment.

Firstly, the continued rise of index funds should support activist engagement, given their voting influence and focus on long-term value creation. Passive investors are taking an increasingly active interest in corporate governance and how environmental and social factors fit into company strategy. They similarly have growing appetite to hold to account companies that fall short of the standards their clients demand. Activism also looks set to proliferate further internationally, particularly in Asia where governments are promoting sound corporate governance, foreign share ownership has increased and local activists have grown in number and profile as investment success rates have improved. 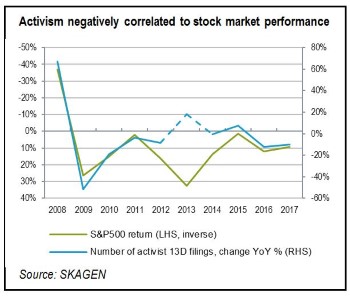 As engaged investors, we welcome the growth of shareholder activism. Given our focus on undervalued companies, we expect to continue investing alongside those pushing for corporate change and anticipate further growth in activist success rates as companies are increasingly held to account by stakeholders. With activism coming of age, our clients should take comfort that their money is being invested in companies with strong corporate governance that promotes positive ethical and social behaviour to ensure the delivery of sustainable, superior long-term shareholder returns.

* Absolute contribution figures based on NOK returns for the period 31 December 2016 to 31 October 2017.

Except otherwise stated, the source of all portfolio information is SKAGEN AS as at 31 October 2017. Contribution figures based on NOK returns at fund level. Data has been obtained from sources which we deem reliable but whose accuracy is not guaranteed by SKAGEN.