SKAGEN Insight: Out of the Shadows

The launch of our latest fund coincided with a bumper year for activist investors across the globe. We look at where SKAGEN Insight has deployed capital and how this has reflected wider activist activity.

For Tomas Johansson, working as an activist investor – and successfully taking on high profile companies like G4S and Danske Bank – revealed an opportunity. By tracking the campaigns of those activist investors he considered most likely to succeed, a shadow activist fund could deliver attractive returns while avoiding some of the agitators' high costs. After several years spent researching hundreds of investment ideas, we turned the concept into reality last year with the launch of SKAGEN Insight.

Before joining SKAGEN in 2015 and spending two years as part of the Global team, Tomas spent six years at Swedish hedge fund, Cevian Capital, one of Europe's largest and most successful activists with over €13bn under management(1). SKAGEN's newest equity fund looks to harness these complementary investment approaches by combining our bottom-up, value-focused philosophy with his previous activist experience to identify underachieving companies that offer the best risk-reward profile on a global basis.

The universe of opportunities is expanding. According to financial advisory firm Lazard(2), a record $62 billion was deployed by 108 activists across 193 companies, more than double the amount in 2016. Activism has come of age over the past few years, with campaigners emboldened by their growing credibility with traditional shareholders and access to larger pools of capital to challenge companies on an increasingly international scale. This growth presents Insight and its 'shadow activist' strategy of investing in companies which are already exposed to activist campaigns with an increasingly large opportunity set.

Insight was launched with internal capital on 21 August last year before being officially opened to outside investors on 4 December. A third (33%) of the fund's value is currently invested in Europe, mirroring the proportion of total activist capital that was directed at European companies last year(2) as US investors increasingly look overseas for attractively valued opportunities.

German industrial group, ThyssenKrupp is the fund's largest holding at 5.8% of the portfolio. We expect operational improvements to drive a re-rating in the industrial conglomerate as it undergoes a restructuring. Other significant European holdings are Swedish mobile manufacturer Ericsson and French electrical goods distributor Rexel (each 4.2% of the fund), which should both boost profitability under new leadership teams. For all three investments we followed Cevian Capital onto the shareholder register.

US companies – activists' traditional hunting ground – make up the rump (48%) of Insight's portfolio. Mondelez is the third largest holding (5.2% weight) as we expect shareholders to benefit from margin expansion as a result of the snack giant's ongoing restructuring. AIG is the next biggest (4.7% weight) as we envisage surplus capital being put to work for the benefit of shareholders.

The remainder (20%) of the portfolio is invested in Asia-Pacific companies, where activist activity generally has grown recently as campaign success rates have increased. Japanese Seven & I is the fund's second largest position (5.2% weight) as we anticipate that the retail group will improve capital allocation and benefit from market consolidation. Compatriot Dai-ichi is the fund's fifth biggest position (4.2% weight) with the life insurance group expected to increase shareholder distributions through de-risking and a more efficient use of capital.

The Insight portfolio demonstrates a high degree of conviction. It has 36 holdings with the ten largest making up 45% of the fund's value, a level of concentration in-line with SKAGEN's other equity funds. Its active share – the proportion of the portfolio invested differently from the fund's benchmark – is also high at 98%. This divergence from the index is also reflected in the fund's valuation. Despite many equity markets being at record levels, Insight's holdings trade over 20% below their average three-year highs – explaining, in part, why they are subject to activist campaigns – with the top 10 expected to deliver 55% upside over a two to three-year investment horizon. 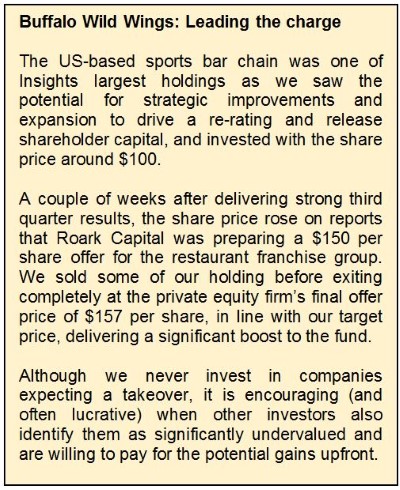 Activist funds' ability to identify re-rating catalysts and drive positive change is reflected in their attractive returns which have seen them beat the underlying market in seven of the past eight years(3). Insight's early performance has been similarly encouraging with the fund delivering 9.6% for EUR investors at the turn of the year, 1.8% ahead of its MSCI World benchmark(4). Returns were boosted by the takeover of Buffalo Wild Wings (see right) but it has been satisfying to see strong operational performance across the portfolio, supporting the investment thesis for many of our holdings.

Ericsson, the fund's second largest contributor, is a case in point. We saw an opportunity after the Swedish telecom giant's share price fell significantly as investors grew impatient with the pace of turnaround. We understand that complex structural and operational change takes time, particularly in large companies, and this recognition was rewarded as third quarter results revealed improving fundamentals and the stock more than recovered its earlier losses.

Another encouraging aspect of the positive portfolio development is that none of its holdings have significantly detracted from performance. US ATM provider Diebold Nixdorf has been the only meaningful drag on performance, costing the fund 1.3%(5) in the fourth quarter, and this was driven by a competitor's profit warning rather than fundamental factors.

The fund's encouraging start and attractive valuation – it currently trades on a normalised P/E of 11.4x versus 15.3x for the index – should provide active ingredients for further excess returns. Its positive outlook is also underpinned by the counter-cyclical nature of activist activity. With markets generally at levels many consider to be ripe for a correction, Insight is well-placed to capitalise on any market downturn and the corporate panic that normally follows, with falling share prices likely to disproportionately punish underperformers and allow investment at knock-down prices.

The continued momentum and globalisation of shareholder activism suggest that even if markets continue their rise and volatility remains low, there will be plentiful shadowing opportunities to generate attractive returns in 2018 and beyond.

Except otherwise stated, the source of all portfolio information is SKAGEN AS as at 31 December 2017. Contribution figures based on NOK returns at fund level. Data has been obtained from sources which we deem reliable but whose accuracy is not guaranteed by SKAGEN.